Last  year was a wild and crazy ride.   What a year! I started a new job with a new company…kind of.  As my office was absorbed by another company, I learned a new role with my promotion.  This meant that … END_OF_DOCUMENT_TOKEN_TO_BE_REPLACED

Yes, Chicago:  The Windy City, Chi-town, the City of the Big Shoulders.  I returned from there Monday and, let me tell you, it was an amazing trip!

It was my first time to Chicago and it all came about because I started a bucket list a couple years ago.  Most of the items are travel and learning items but this year I decided it was time to cross some of these things off.  I am turning forty in a few short months and I wanted to at least cross a couple items off.  It’s always been my dream to go to Wrigley Field and to Soldier Field (I am a die hard Cubs and Bears fan) and since they are on my bucket list, it was going to happen.

I asked my dad to go with me at first and he was excited.  Then, a while later, I decided to ask my mom as well.  I love my parents and I want to make memories with them.  Mom was hesitant but chose to go and I’m glad she did.

Last Thursday we made the trek to Denver to board our plane for a short two hour flight to Chicago.  I was excited to say the least.  And then the Midwest weather got in the way and we circled Chicago for a while…then got diverted to Kansas City.  After waiting on the plane for almost three hours we finally got back into the air and landed in Chicago only to wait another two and a half hours to de-plane.  I wanted to kiss the ground in Chicago!

I am a member of the Grand Junction Lions Club and our first stop on Friday was to Lions Club International for a tour.  We went straight from there, via our trusty Uber driver, to Wrigley Field.  We had the fortune to take Michigan Avenue to the ballpark and got our first peak of Lake Michigan.

When we got to Wrigley, I was ecstatic!  I actually skipped once inside.  My dream was coming true!  I had written Wrigley Field ahead of time regarding gluten free eats and they had a diner that had buns for hamburgers and hot dogs, although this day they were out of hamburger buns.  Not to worry, I wanted a ballpark hotdog!  Since the fries are not in a dedicated fryer they were careful to give us kettle chips instead.  Pair that with a hard cider and I was in heaven!

After the game we decided to walk a mile to Chicago’s Pizza.  I had read reviews of this place online and they were great.  Their gluten free pizza had high reviews so we decided to give them a try.  The atmosphere was cozy and warm and we were warmly greeted.  We told the server that we were gluten free and he proceeded to tell us about the gluten free offerings.  We decided to have cheesy garlic bread and then ordered a stuffed pizza.  They brought out a little appetizer breadsticks and then the fun began.  The cheesy garlic bread was crispy with a nice layer of cheese and a hint of garlic.  Dip it in the tomato sauce and it was amazing.  Then the pizza.  Let me tell you, if you EVER get to Chicago, you have to stop here.  The pizza was about four or five inches thick and the cheese strung out forever!  It was the best tasting pizza I’ve ever had.  By the way, they will ship pizzas nationwide and it’s going to be my little treat from time to time!  Pictures don’t do the pizza justice but you can see the goodness! 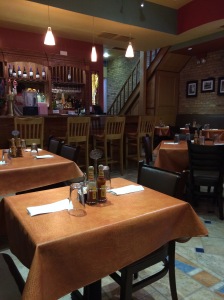 The next day we decided to venture to the Navy Pier.  It’s a beautiful area with shops and restaurants as well as an amusement park.  They give boat tours and dinner/lunch tours as well.  We started the day at Harry Caray‘s and weren’t disappointed.  Dad had the burger with a gluten free bun and said it was amazing.  Mom and I had the fish tacos and they were the best I ever had.  The tilapia was seasoned just right, the sauce added a little kick and the salsas finished it off.  We wandered the pier, having a mid afternoon cocktail after our boat tour, and then settled on Bubba Gump‘s for dad’s birthday dinner.  The server was helpful and I decided on the shrimp and veggie skewers with jasmine rice and mom and dad had the Accidental Fish & Shrimp Broiled Mahi Mahi over a bed of Jasmine Rice.  My meal was so refreshing and done just right and mom and dad said that their meal was great as well. 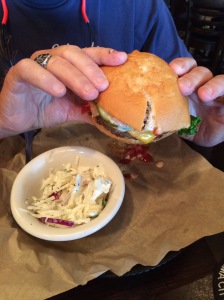 The last Chicago item on my bucket list was to see the Chicago Bears play at Soldier Field.  While the Bears didn’t have the stadium food that Wrigley had, it still had a few options.  The brats were gluten free (no buns) as were the tortilla chips and the nacho cheese.  They also have popcorn and Redbridge Beer as well as hard ciders.  We had enough to eat and got to see the Bears get stomped but it was well worth going.  That night we ate in the hotel and they were so good about knowing what was gluten free and had it marked on the menu.  My chicken was done just perfect and the potato-bacon hash was amazing!

The plane ride home was without incident which I was thankful for!

I’ve read that if you are a foodie that Chicago is a place to visit and I wasn’t disappointed.  Their gluten free foods were delish and I do plan on going back.  In the meantime, I will have my pizza delivered from Chicago!